The fundamental philosophy of wildlife gardening is that it provides a shared resource, where the owner can grow food and create an attractive and satisfying garden where native plants and animals can also thrive. Many animals that do take up  residence often help to keep garden pests under control and their daily activities provide a year-round source of interest for the garden's owners. 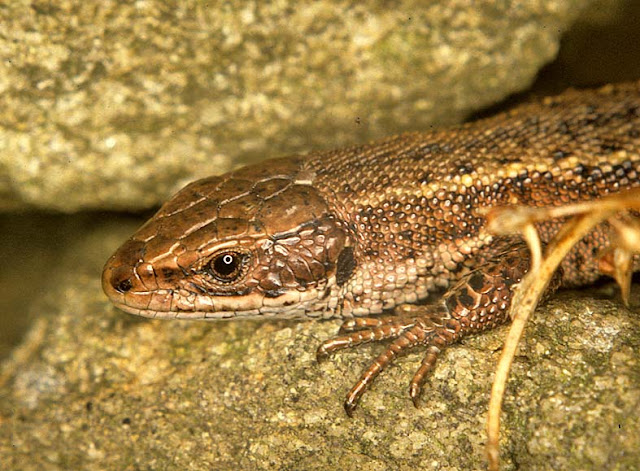 Most gardeners like to enclose their personal patch of paradise with walls or fences and also create paved areas where they can sit and enjoy the fruits of their labour on sunny days. Even these patches of hard landscape soon acquire a native animal fauna all of their own. Butterflies and spiders like to sunbathe on sun-drenched stones, ants will build their nests under paving, while lichen-covered rocks with their mossy crevices add character to a garden and provide a home to vast numbers of minute animals, beyond the range of the human eye, at the bottom of the food chain.


What could be more satisfying, on a sunny summer afternoon, than sitting in a deck  chair, listening to thrushes crack open snails on the garden path or hearing them deliver their exultant song from the rooftops? That's the feel-good reward for the wildlife gardener. 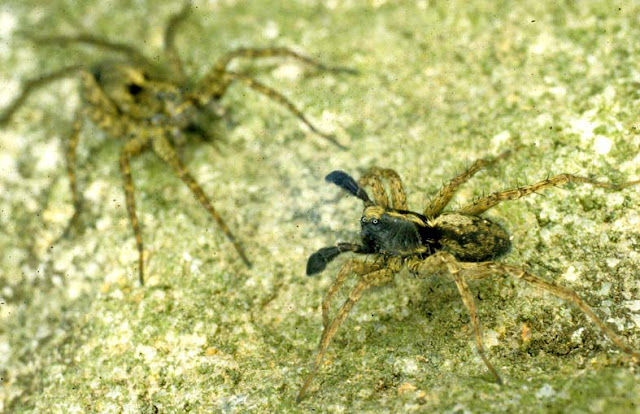 Male wolf spiders conduct their perilous courtship on sun-warmed stone surfaces. The smaller males have two black palps on their head which they use like semaphore flags, waving them at the larger and very aggressive females to indicate their amorous intentions. When she's pacified, which often entails long periods of intense palp-waving, cautious approaches and sudden retreats, they mate and in due course .... 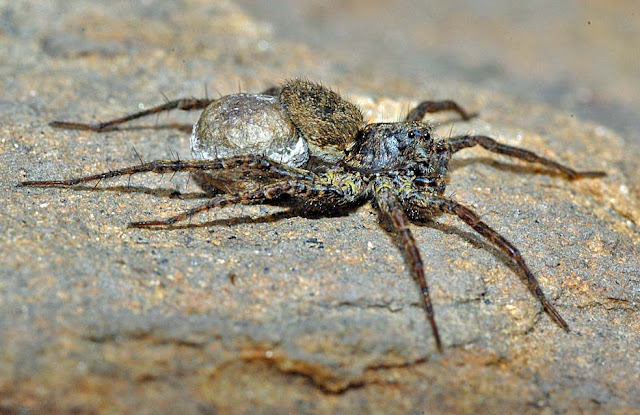 ........ the female reappears with her egg sac attached to her abdomen. She spends the long summer days sunbathing on rocks or garden paths until .... 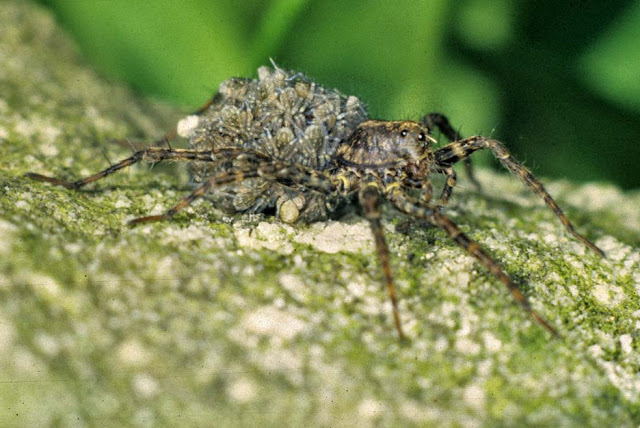 .......... her brood hatches, and then she carries her spiderlings around on her abdomen until they are large enough to fend for themselves. 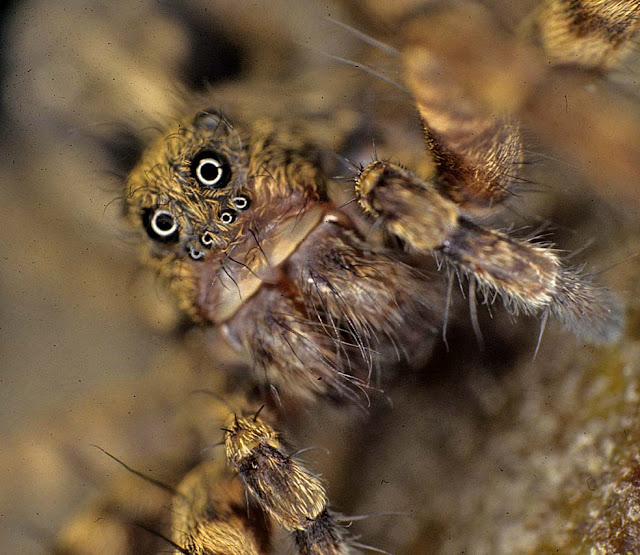 Wolf spiders don't build webs. Instead they stalk and chase their prey, impaling it with their fearsome jaws. 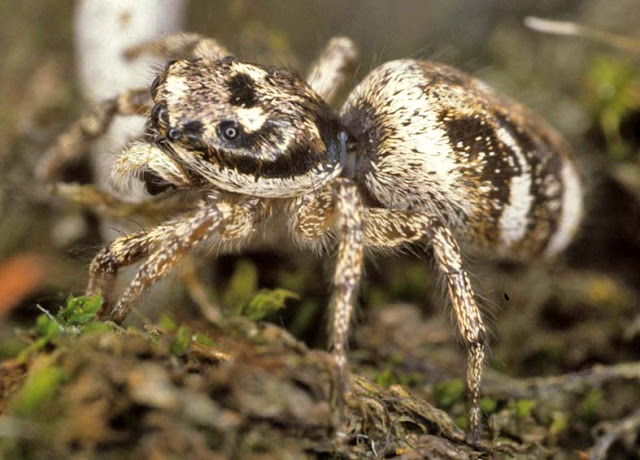 Black-and-white striped Zebra spiders are tiny but have a deadly hunting technique. They like to sunbathe on warm surfaces, like house walls and window ledges, waiting until small flies land within range. Then they leap on their prey, but not before securing their themselves to their perch with a silken safety thread. 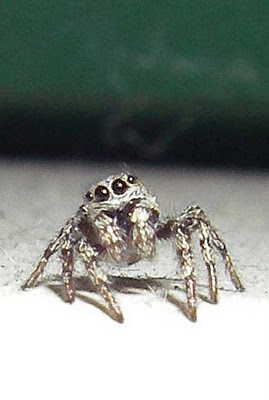 The secret of a zebra spider's hunting success lies in its eyes. Two of these are enormous in relation to the size of the spider and they give it excellent vision and the ability to judge distances accurately. 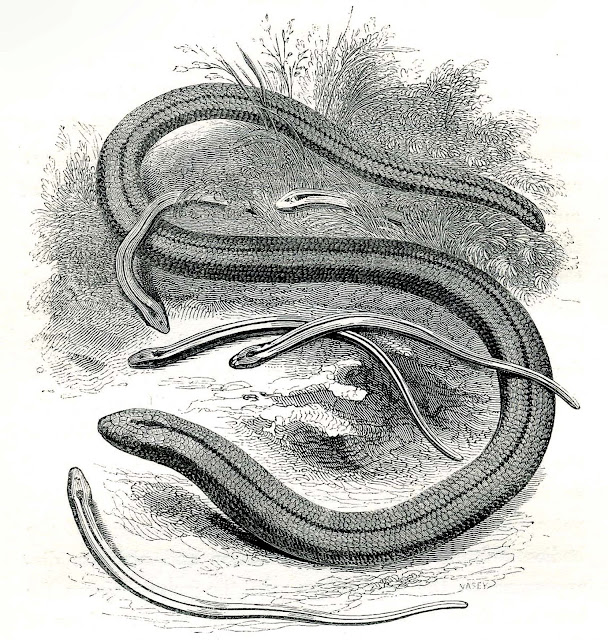 Slow-worms, which are legless lizards, are the reptiles that are most likely to turn up in a wildlife garden. They like to shelter under sun-warmed surfaces, so sometimes occupy spaces under rockery stones, emerging to hunt small soil animals and slugs.

If you have slow-worms in the garden, take great care if you pick them up - which is very tempting, because the feeling of a slow-worm sliding between your fingers is a delightful sensation. Never pick one up by the tail because their defence when they're gripped in this way is to shed their tail, which continues to wriggle while its owner slithers away to safety. It will regrow its tail but the new one will be short and stumpy, spoiling the beautifully tapered body shape of the intact animal. 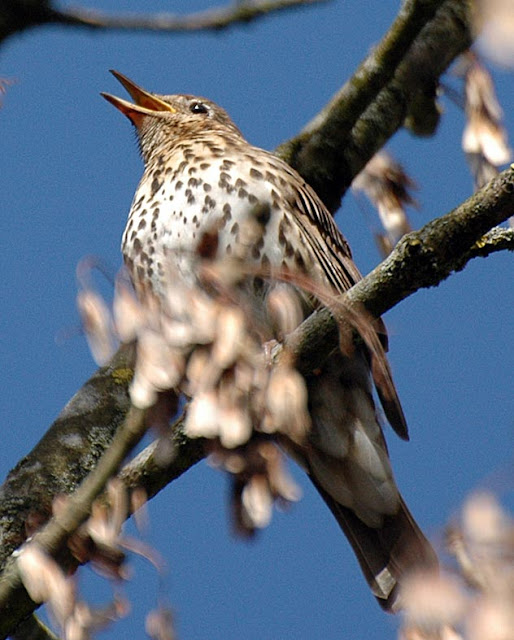 The song of a song thrush, often delivered from a tree top or house roof, is a glorious sound at the end of a long summer day. But these are more than just songsters - they are incredibly efficient hunters of garden snails and the evidence of their activity is there to see on rocks or on the garden path, in the form of broken snail shells. 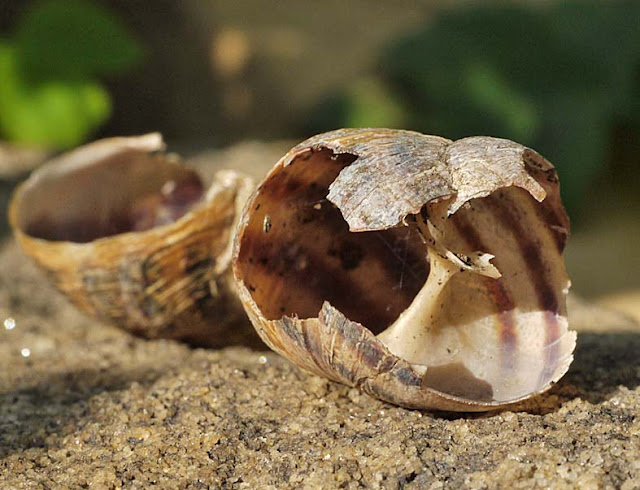 Song thrushes grip snail shells by their lip and whack them against an anvil stone - listen and you'll sometimes hear the fatal blow, when the shell cracks and the mollusc's fate is sealed. 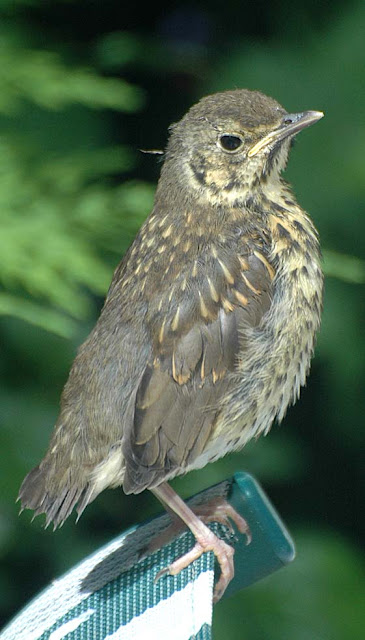 Song thrushes will readily nest in gardens and by early summer their fledglings leave the nest. Within a month they too will be terrorising the garden snail population

You can enhance the wildlife value of a garden wall by clothing it in ivy. This is one of the most useful native plants for wildlife in the garden because its whole life cycle is out of step with most other plants. 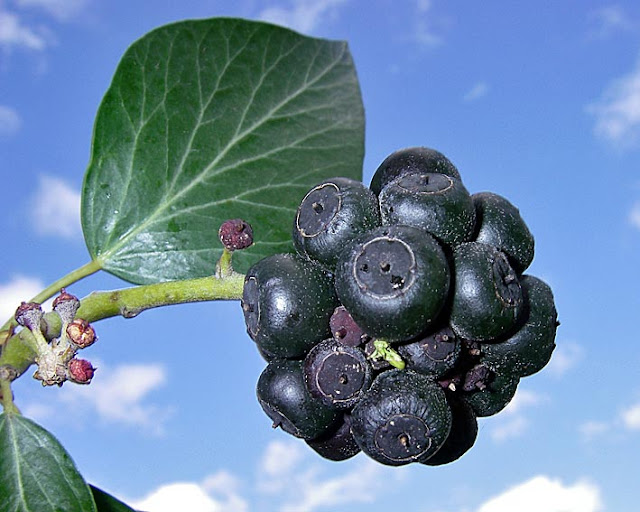 In spring it produces its black fruits, just when migratory birds need them most, while it  autumn it produces its flowers, rich in pollen and nectar, but when all the other flowers are dying ... 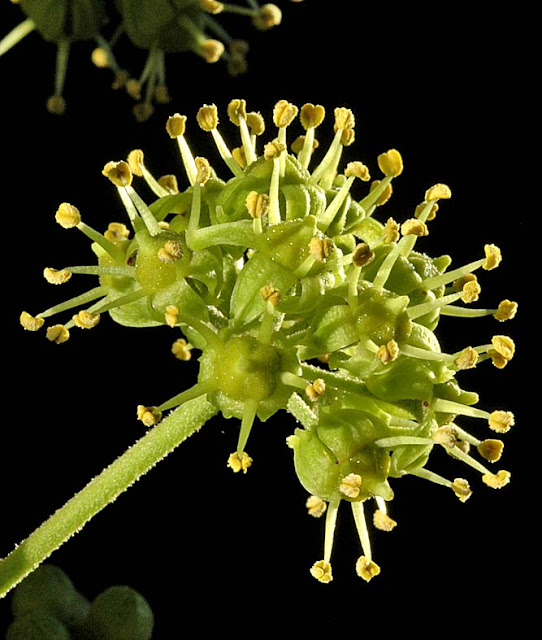 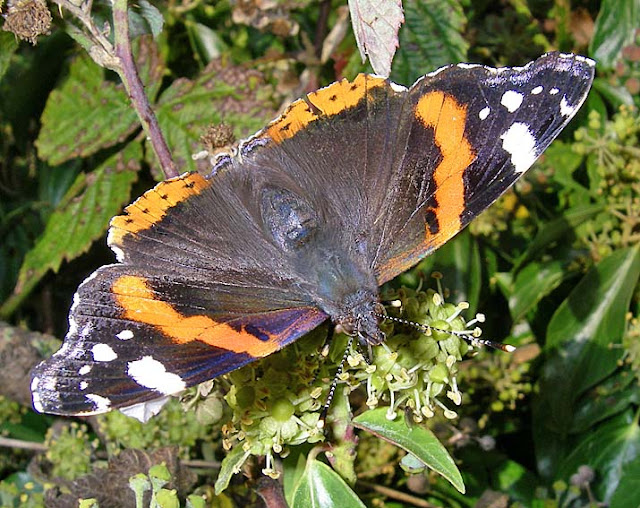 Many butterflies and other insects use ivy flowers as their 'last chance saloon', topping up their energy supplies with nectar before winter arrives. 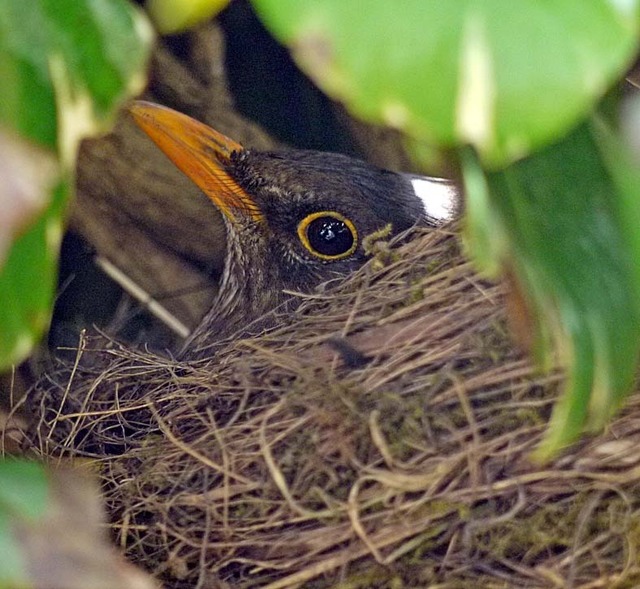 Ivy's evergreen leaves produce a secure, waterproof hibernation site for a host of insects, like brimstone butterflies for example, and in spring they provide cover for early nesters like blackbirds.

Holly blue butterflies, with their exquisite silky undersides and vibrant blue wings, readily breed in gardens, even in the suburbs of large cities. To host a colony you need two plants in the garden - holly and ivy. Holly blues produce two generations each year. The spring generation lays its eggs on holly flower buds in early May and the late summer generation lays eggs on ivy flower buds. 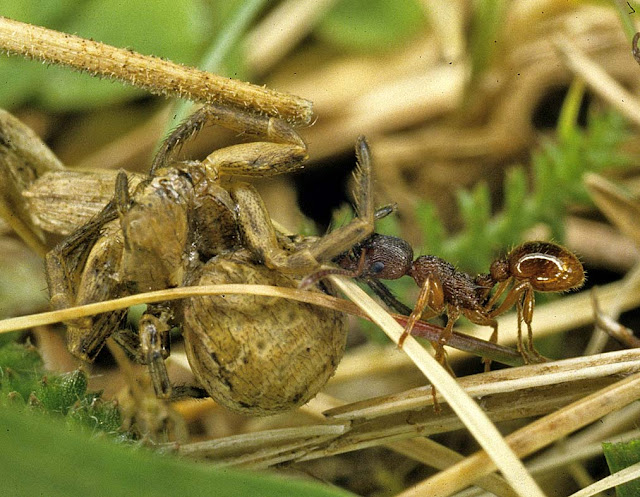 Ants like to excavate their nests under sun-warmed stones - often under garden path flagstones. Although small, they are immensely strong and will drag back prey -  like this spider that's several times the weight of the ant - to their nest. 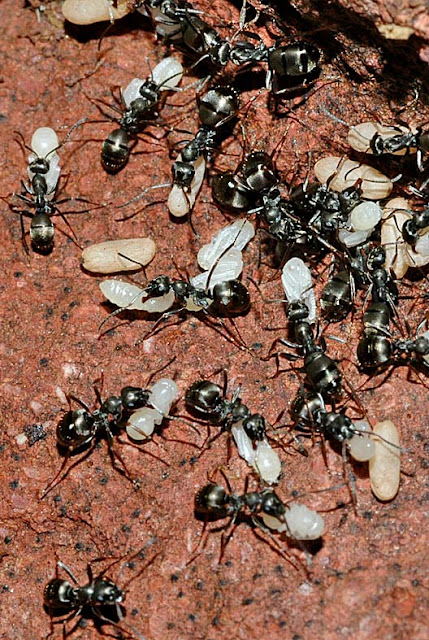 When ants' nests are disturbed their first instinct is to 'save the children', grabbing their white larvae and pupae in their jaws and carrying them away to safety. If you have a black ant colony in your garden you might sometimes find them clustered around greenfly on plants. These ants satisfy their craving for sugar by 'farming' aphids - stroking them with their antennae to persuade their 'herd' to provide honeydew, in exchange for protection.


The most spectacular event in the black ant's calendar is the nuptial flight when, on warm, humid days in summer, swarms of winged males take flight in pursuit of winged queens. The column of ants rises like smoke, then the mated queen returns to earth to shed her wings and start a new nest, leaving the males to the mercy of twittering flocks of swifts and swallows that arrive from far and wide to feast on them